I don’t remember much about my great-grandfather, but I do know that he worked as a train engineer most of his life. Fortunately, my father, Eugene C. Hammons, wrote this for his memoirs.

Once upon a time, before diesel engines, railroad stations smelled of hot oil, burning coal and steam from the big iron locomotives leaving a lasting memory of the old railway station in Galveston. I was but 8 or 9 when I was permitted to walk to the railroad station to greet Grandpa who was the engineer on the smoking, belching locomotive as he finished his “run”.  Frequently he would be walking around to each wheel of the locomotive with a long-spouted oil can oiling the “hot box” that was stuffed with shredded cloth. Grandpa had a “grip” that was a metal suitcase that folded out from the top. Along with a change of clothes, there was a thermos of whatever food that Grandma has fixed for him since he his run was always overnight and back. He would save an apple for me, that was special as the odor of the locomotive permeated the skin of the apple which I thought made it better.

I waited until he had finished oiling, and then we would walk the ten or twelve blocks home. I wanted to carry the grip but made of metal it was too heavy for a nine-year-old. Talk would be about how it was to run a locomotive, how fast did it go, something less than a mile minute back then, and did he have to shovel coal into the boiler, and no that was the job of the fireman, not the engineer.

In 1919, a hurricane once again came to Galveston. Memories were still fresh in everyone’s mind about the devastation of the 1900 storm, which to this day remains the worst natural disaster in American history. By this time, the seawall had been built as well as the railroad bridge, that was called the Causeway, that connected Galveston to the mainland. It was feared the bridge might be washed away leaving the city stranded.  Someone had a notion that a locomotive loaded with rail cars might exert enough weight to prevent it from washing away. The City leaders called for volunteers for the task.  Grandpa was the only one to volunteer and ended up running a train back and forth over the bridge, alone, as they couldn’t get a fireman  to come along to shovel the coal into the boiler, so Grandpa did both jobs, engineer and fireman  He did this for some thirty hours. Whether he saved the Causeway with his effort is open to conjecture, but it is still there to this day and used for rail traffic only.  My source for this story is a report in the Galveston Daily News of the time, I had a copy at one time of the article, but due to time and negligence I can no longer locate where it might be.

Grandpa has not always been an engineer.  He began life as a “Teamster” in Missouri where he met and married Lilly Collins late of Sedalia. A teamster was what the name implies, someone who hauled freight with a wagon and mules. He was nineteen at the time and undoubtedly figured, quite rightly, that the mode of hauling freight days was numbered and applying for a job with the railroad made a great deal of sense. So sometime around the turn of the century, Grandma, Grandpa, their son, John and daughters Nellie and Clara Helen (my mother) moved to Galveston so that he could go to work for the Santa Fe Railroad. The Santa Fe occupied a large and imposing white stone building at the end of Strand Street. Aside from offices and the station, one corner of it housed The Harvey House restaurant that was a good place to eat, and the family met and had Sunday dinner there often. The “family” consisted of not just mom, dad and Bill, Jr, but Aunt Nellie’s family too, and she had six children, along with Grandma Emma Lou (Grandpa’s mother) and Grandma Lilly, it was quite a tribe.  Gratefully, Grandpa would always pay.

While Grandpa wore the customary overalls and striped railroad cap, he was a thirty-second-degree mason and a lifetime member of the Scottish Rite. He dressed in a Brooks Brothers blue pinstriped suit with a grey fedora hat, complete with a diamond tie tack signifying his high rank in the Scottish Rite.  He could easily be mistaken for the town banker. With the exception of one 1938 Oldsmobile…Grandpa owned and drove Cadillacs. The first one his was a 1931 sedan, twelve cylinders and it was long and spacious inside.  There was a prime mechanism that needed to be pumped two or three times or it wouldn’t start. While this seems odd in today’s world, my airplane required priming and is common in general aviation aircraft. Dad would kid Grandpa about having a built-in FLIT gun for mosquitoes.  In 1938 Gramps bought an Oldsmobile, an aberration considering all of the other cars he owned were Caddys. The Olds was General Motors experimental vehicle testing new innovations. The ‘38 sported a new feature in that the gear shift had been removed from the floor and located under the steering wheel, a first in its time  It had a button on the shift lever that eliminated the requirement of using the clutch to shift gears, a forerunner of the automatic transmission.

We all lived together in the house on Ball Street until 1943 when he bought a two-story brick home in Cedar Lawn in the West End. It had six bedrooms and a seventh if you counted the room over the portico shea.  Grandma Emma Lou and Grandma Lily used one for their “quilts room” with a quilt frame that took up most of the space. They would sit in there for hours quilting. Heavens what patience that must have taken. Downstairs was a beautiful sunroom where Grandma and I would play Chinese Checkers, and card games like “Fish”. On my infrequent visits to Galveston, I have always taken time to drive by that house at 4400 N-1/2. It hadn’t changed a bit the last time I was there.

As might be guessed, I had a very special relationship with Grandpa Varnon. Years later, after Grandma died and he followed us to Houston, I was going to the University of Houston, working at nights and driving across town to get it all done. Grandpa gave me his Texaco credit card to pay for my gas. It was really the only outside help I received.

Grandpa worked until he was age 80. By that time locomotives had been replaced with diesels, which he loved as they were much cleaner and easier to drive. He only quit because he tired of the company physicians harassing him with too frequent medical exams, to no avail, as he remained healthy.

What sort of a man and woman were John T. And Lillie Varnon? The writer can only put together bits and pieces, some from a boyhood/early manhood memory, some from what we know, but there are gaps that can only be guessed at.

We know for a fact that both John and Lillie were educated so they probably came from a middle-income family that were city people as opposed to an agrarian background. Portraits of Emma Lou Varnon and Queen Victoria Collins hint at middle class status, one of Emma Lou with hair carefully coiffured and dressed in the style of the day.

Grandma Collins Varnon had been a school teacher and also worked in a facility for the mentality disturbed before marrying John. We know quite a bit about her father through his Confederate war record, but beyond that, his life is a mystery, as he never settled down after the War of Northern Aggression. (more on that later).

Although John Thomas Varnon would probably fit today’s narrative as being a “blue collar” worker, his persona was otherwise, and he and Lillie lived within their means, saved their money and purchased everything on a cash basis. I really do not think he ever borrowed money.

When Aunt Nellie and George Robertson divorced, Nellie couldn’t continue to live in Galveston, or so she thought. A few years before, they had built a spacious brick house close to Cedar Lawn to accommodate their large family of Frank, Nadine, Durwood, John and Patricia.

Grandpa purchased the Galveston house, located at 4400 N1/2,.  At the same time, he purchased a house in Houston for Nellie, located as 903 West Main, in the Melrose district.

John and Lillie moved into that house and rented out the old house to tenements during the World War when the government slapped price controls on everything including rents. Until then he and Lillie were long term democrats. Gramps fairly bristled at being told that he could not raise rent, thereafter he voted Republican.

Grandpa died at the age of 95 and is buried in Lawndale Cemetery along with Grandma Lillie, who pre-deceased him some years earlier, my parents and brother and aunt Nellie. They are all there in a family plot that he bought for all of us back in the ‘30’s. He was in many ways an enigma, more of a southern gentleman who never drank, put no smoking signs in his house and car, lived a life more akin to a professional person, yet gentle and generous. Without him, I really cannot imagine how my family as well as the Robertson side of the family could have survived the Great Depression.

I love him still and think of him often. 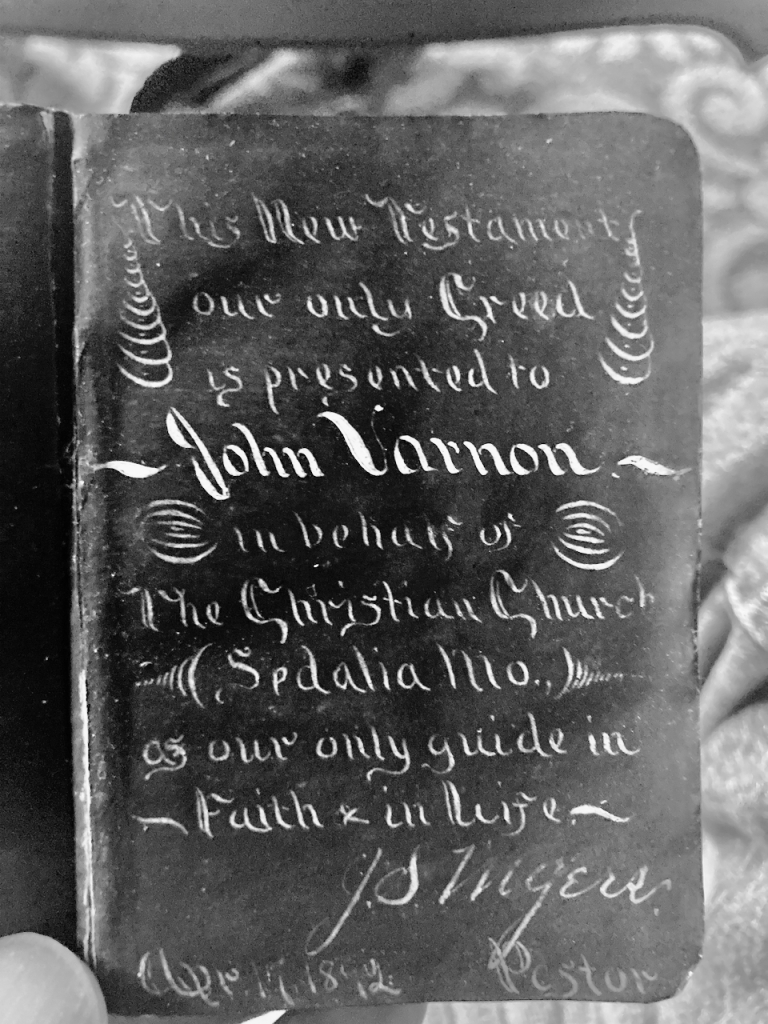 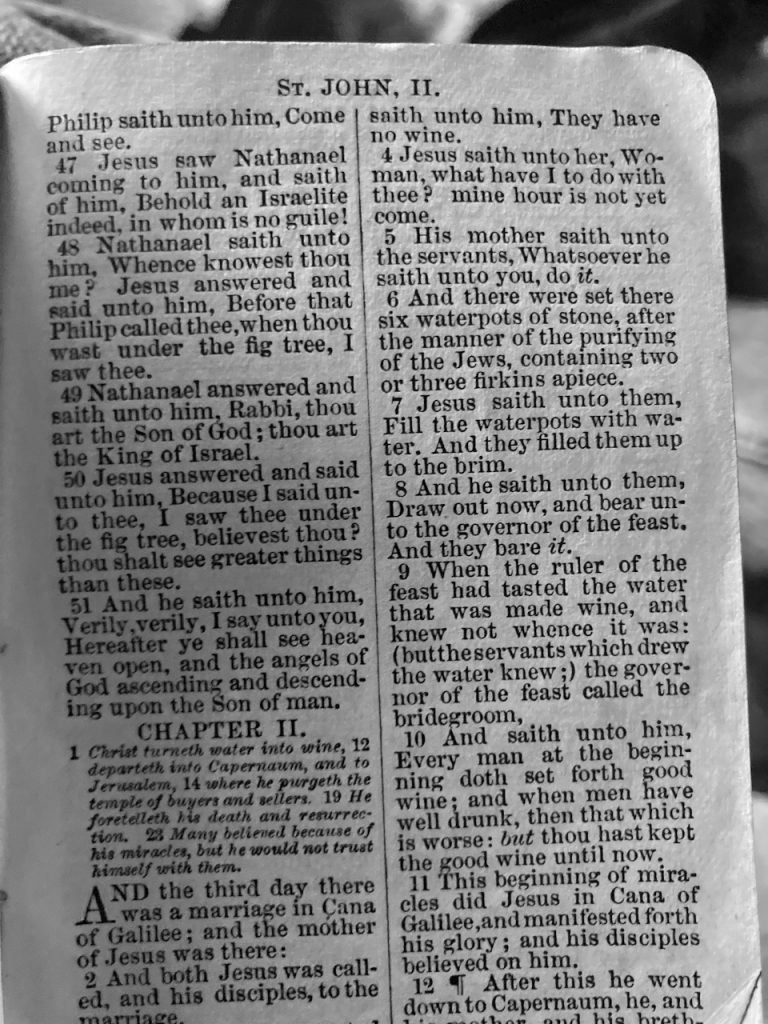