Finding a Spouse on Christian Mingle 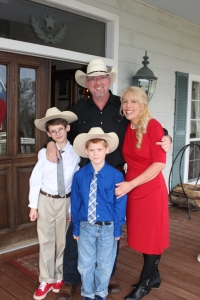 My wife and I have had several people ask us about using Christian dating sites to find a spouse, since she and I used a Christian dating site to find each other. I guess you could say we were one of the success stories for Christian Mingle, the site we used. But allow me to stipulate that God was the One who was successful, not the website.

So the question is: Can God use a dating web site to bring two of His children together?

I would have to answer in the affirmative. But let me give some background before I tell you why Christian Mingle worked for us. First off, you must know that I was quite skeptical about using a website to find a spouse. I guess there was a part of me that doubted God could actually find me a godly spouse through such carnal means as a dating website. I’m not saying the sites are inherently carnal in nature. I believe the sites are carnal because carnal people use them, just as carnal people use churches to meet people as well. I was skeptical that godly people would use such sites, or that God would use such a means to bring two people together.

Secondly, I thought it would take years to sift through the chaff on the web site. I was wrong on both of my doubts.

Please don’t think I’m going to praise the site as the reason God brought Heidi into my life. The site was the means God used, but it was God who brought her to me, not the site. All that to say that God can use these sites to bring godly people together.

When I first went onto the site I have to say that I was quite overwhelmed by the number of available women there. It was like walking into a golf shop with a thousand brands of golf clubs and the freedom to choose any number of them. In this regard, it wasn’t really healthy since what we are a seeing in each posting in simply a picture and a short description. The first couple of days on the site were overwhelming, and I found myself surfing for love… yes, carnal would be the way to describe it.

Then I started getting hits and smiles from interested women. It was exciting at first. But then when I began to dig a little deeper, and it was hard to see if these women were Christians at all. Their descriptions were quite simplistic in nature. They listed that the person they were looking for was someone fun, energetic, easy to get along with, blah, blah, blah. That should be assumed. After all, who is looking for someone who is dull, a sluggard, and a real pain in the backside? Here is a real introduction:

To me, the world is gorgeous, complex and paradoxical; I like people who zero in on truth without adding to the mystery. Things I look for in a man are integrity, kindness and an inner rudder, i.e., being able to steer his own path. Independent, not reliant on others, but caring about friends‘ welfare. Successful in his field, but valuing the actual accomplishment of goals above their material rewards. Christian values. Chemistry. Communication.

That could be on any dating website. The bit about Christian values is almost an afterthought. She was saying the man needed to be a Christian, just have Christianvalues.

This type of description was quite typical and frustrating after a while. I didn’t like the profiles of the women that were sending me smiles because there was nothing in them that said the person was a born-again Christian. Did these women know Christ all? Was  Christ their  all-in-all? That is what I was looking for in a potential spouse. I didn’t want someone who just said they are a Christian. I wanted someone who knew they were, and knew what they believed and why they believed it.

I changed my profile so that it was no longer generic, but very specific. Here is what I wrote:

My greatest passion, besides my two boys, is preaching and teaching God’s word. I would love to return to full-time ministry and would rejoice if the LORD gave me a loving wife to help me in that regard as well. I enjoy life, but also take God’s truth seriously and believe that the chief end of man is to glorify God and enjoy Him forever. You might say I’m looking for a like-minded woman who loves the LORD, knows what she believes and why she believes it. I am hoping and praying that the LORD will bring me a godly woman to share my life with. Send me a smile if you are interested.

And yes, I do long for the simple enjoyments of being with someone you love, walking on the beach, hiking in the mountains, eating with friends, sending unexpected love notes and generally doing a lot of things together. I just feel that the basis of our relationship has to be Christ and the Reformed/ Calvinistic understanding of Scripture so we can walk together as the LORD has called us to do.

The casual responses came to a screeching halt. At first, I thought I had become too specific. It seemed like I was scaring away any potential mates. But after a few days, I got a smile in an email.

Here’s the SMILE that you asked for :^) Do you subscribe to the Westminster Confession? Any exceptions? Grace & Peace, Heidi

I was floored. Here was a woman who actually knew what the Westminster Confession of Faith was, and was asking me the same question I am asked when I’m on the floor of a presbytery seeking acceptance. I guess you could say that she struck a chord in me from the moment I read those words.

For me, Heidi was, and is a gem. To find someone who holds to the same beliefs, even within the Christian community, is very difficult because most who hold to the same tenants of the faith that I do, as expressed in the Westminster Confession, don’t usually end up in divorce. Heidi was a pure surprise. I figured I would find a godly woman and then have to teach her about the Confession, and Reformed theology. With Heidi, I found a godly woman who was already Reformed in her convictions. Again, I was floored.

This is why Christian Mingle worked for me. I got specific and the only person who could respond, did. It didn’t take us long to get to know each other at all after this initial discovery. In fact, it has only been four months since that first email from Heidi and we are already married. This is another thing that shocked both of us…how quickly the LORD brought us together. It may work that way for you, it may not. It may take a lot longer. I’m just saying this was how God worked in our lives.

This is the only way a dating website can work. You must be specific in what you want. The generic intro will bring you only generic responses. And when you are looking for a spouse, generic will not do.

Also, please know that just because God used Christian Mingle in our lives, doesn’t mean He will use it in your life. He could, but a dating service is not the only way to find a suitable spouse.

And finally, realize that using a website to find a spouse is not the end-all-be-all of your marriage. You will still have to work at having a great marriage.  Marriage is hard, no matter how compatible you are with someone. It wasn’t meant to be easy. It was meant to be sanctifying and if both of you are in the LORD, then it will be.

The point is that God used Christian Mingle to bring Heidi and me together. Dating websites can work. But that doesn’t mean you have to use one when looking for a spouse. It worked for us. If you are single and looking for a spouse, look to the LORD and see how He leads you. He may surprise you.